What Inspection Methods are often used in PCB Aseembly

Inspection is crucial to ensure high quality products are delivered to customers. Few things are more frustrating to a customer than an ‘out-of-box’ or premature failure due to an avoidable fault. Thankfully board assemblers offer multiple layers of testing and inspection to ensure high quality units are produced and delivered to customers. Here you can learn some PCB inspection methods often used in PCB Assembly.

Visual inspection is a vital element in ensuring problems are captured and corrected as early in the process as possible, reducing the time and cost associated with rework and wastage. Which can be used after lots of steps during PCB assembly process and equipment for visual inspection is selected based on the positions of inspection targets. For example, after solder paste printing and device placement, inspection staff is able to find out obvious defects with naked eyes such as contaminative solder paste and missing components. The most prevalent visual inspection is capable of inspecting reflow solder joints by observing light rays reflected from ordinary prism from different angles. Generally speaking, this type of inspection can test 5 joints in just one second.2, Structural Process Test System (SPTS) 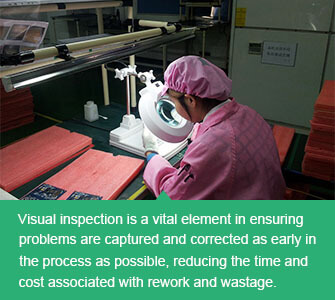 The A.O.I. test verifies the finished conductor trace image for deviations from the Gerber data and finds errors that the E-Test may not discover, such as (for example) narrowed, but still unbroken conductor traces.

The A.O.I. test is especially important for the following application areas:

prior to component assembly. It provides data for real-time structural process control of solder paste printing including viscosity, alignment, cleanliness, fluidity and squeezing speed and stress.

X-ray inspection technology, usually referred to Automated X-ray inspection (AXI), is a technology used to inspect the hidden features of target objects or products with X-rays as its source. Nowadays, X-ray inspection is widely used in lots of applications such as medical, industrial control, and aerospace. As for PCB inspection, X-ray is massively used in the process of PCB assembly in order to test the quality of PCBs, which is one of the most important steps for quality-oriented PCB manufacturers.

In order to get improved industry standard, PCBASTORE have equipped with advanced inspection system and professional staffs to ensure high quality of PCB assembly.

If you have any comments or suggestions about this post, please leave a reply here

Next article:What PCB materials are widely used and How?
Previous article:How and Why to manufacture your PCBs in a panel array