What is the relationship between hole and solder mask

A lot of people just know the assembly parts on PCB board . But do you know what are the hole and solder mask related ? They are very essential when assembly .

In most PCB designs the application of a surface Solder Mask involves predefined levels of mask expansion around Pads, Vias and other PCB object primitives. The degree of Solder Mask Expansion applied generally opens the exposed surface area slightly beyond the object’s copper land pattern, but can also be applied in negative degrees to the point of full coverage – via or pad Tenting.

The conventional reference for the calculated mask expansion is the perimeter of the object, such as the copper land edge for a pad or via. So for example, a 5mil Solder Mask Expansion applied to a 60mil diameter round pad will create a mask opening of 70mil. In practice, the mask expansion opening will match the shape of the object.

To increase the flexibility of how Solder Mask Expansions can be applied in Altium Designer, a new Solder Mask From The Hole Edge option has been added to the configuration properties for Pads (Pad dialog) and Vias (Via dialog) 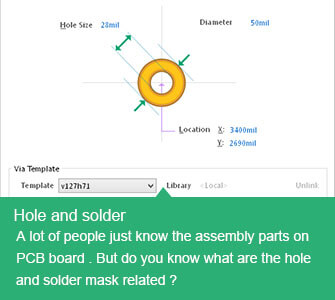 The Solder Mask from the Hole Edge option overrules the standard Mask Expansion behavior that is
determined from the Pad/Via land pattern edge. 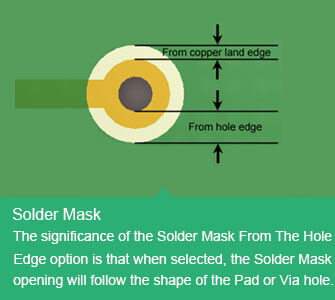 The two Solder Expansion reference options. The lower approach is applied
when the Solder Mask From The Hole Edge option is enabled.

The significance of the Solder Mask From The Hole Edge option is that when selected, the Solder Mask opening will follow the shape of the Pad or Via hole. The mask is therefore independent of pad shape and size, and is scaled from both the hole size and shape.

So for example, a pad/via with a square hole will create a square mask opening that matches the hole dimensions, plus the assigned expansion value – as applied by the assigned pad/via expansion design rule, or by manual entry. Also note that a Pad or Via's expansion mask opening size will track any changes in the hole size.

This opens up a range of possible Pad and Via Solder Mask Expansion characteristics that can be applied to achieve specific PCB layout results. 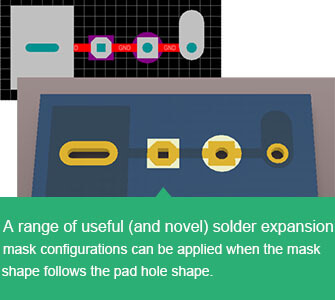 A range of useful (and novel) solder expansion mask configurations can be applied when the mask shape follows the pad hole shape.

Note that the applied Solder Mask Expansion Rule will be applied from the pad/via hole perimeterrather than its land pattern perimeter, so an existing rule may lead to unexpected results.

To cater for the above, an additional Solder Mask Expansion rule can be created using the query expression HasSolderMaskFromHoleEdge = True. If the expression HasSolderMaskFromHoleEdge = False is also added to the existing rule, separate expansion values will be applied to the two Solder Mask Expansion configurations (expansion from Via land edge and expansion from Via Hole edge).

To provide full access, the pad/via Solder Mask From The Hole Edge parameter is integrated into Altium Designer’s relevant functions and features, such as the PCB Inspector (and PCBLIB Inspector) panels, PCB List (and PCBLIB List) panel, etc.

If you want to find a factory to assembly your PCB board , just contact me .

Emma Mai  would tell you everything she knows .

Next article:Aluminum PCB substrate the same as the printed circuit board
Previous article:What are the steps of assembly PCB board ?