What is Heavy Copper PCB?

The current industrial needs are increasingly calling for heavy copper PCB designs. The electronics field has particularly seen increased adoption of these PCBs in complicated switches that have to be in a small space. This is due to the copper's high conductivity of both electricity and heat. The result is a multi-layered or a double-sided board that can entail a detailed external layer(s) coupled with heavy copper layers on the inside layers. Thus, you'll find these boards in power converters and planar transformers alike. 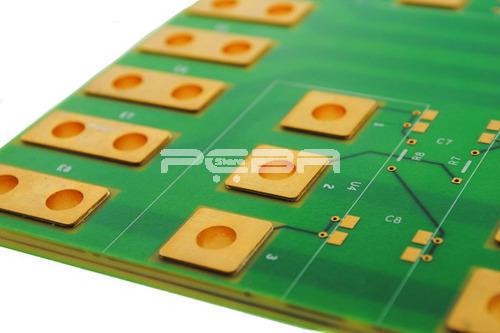 What Is Heavy Copper PCB?

Going by ICP standards, there may not be a proper definition for Heavy Copper Board, but that's not going to be an issue here. You are going to learn what a heavy copper PCB Design achieves. A Heavy Copper Printed board generally a PCB printed with copper conductors whose total weight ranges between three to twenty ounces per square foot. Some heavy copper PCB manufacturers produce boards with a copper weight between 20 and 200-ounce per square foot. These are commonly referred to as Extreme Copper PCB's.

All heavy copper PCB boards utilize the same principles except for techniques where etching and plating are the most common. Unlike the current high-speed plating, and differential etching methods in current use, the traditional methods mostly involved etching a thick material clad with copper, which often produced uneven sidewalls and unbearable undercutting.

Combining the modern plating and etching techniques have resulted in heavy copper PCB boards with straight sidewalls and trivial undercut, resulting to what we today call Power Link. This is a technique of incorporating the features of a standard board into a heavy copper PCB.

From the beginning of this article, it's pretty much easy to tell that heavy copper boards are largely beneficial. You may have noticed some applications of this technology already, but let's look at the benefits first:

It's evident that the ability of heavy copper boards to support frequency, high current, high temperature, and recurring thermal cycles, is due to the stacking of otherwise multiple layers, onto a single layer. This reduces the overall size and weight of the board, allowing for small high-performance electronics.

Not just any board can stand all that the heavy copper PCB can withstand, without a drop in board quality or performance. Compared to ordinary PCB boards, these boards are more likely to be used across gadgets of varying power and signal strengths.

High-frequency boards generate a lot of heat some of which cannot be adequately dissipated by the fan cooling system. This heat is detrimental to the delicate soldered joints, taking down the performance and eventually destroying the board. Heavy copper PCB boards, will not only produce lesser heat due to enhanced conductivity but also resist and conduct away any external heat at a far much higher rate.

4. Eliminates the need to have two separate boards

Traditionally, you couldn't find a high power circuit built together with a control circuit. Thanks to the heavy copper flex PCB that boards with both high-power, and excellent signal capabilities can now be produced, allowing control, and high-power circuits on a single board.

5. Structural advantage of the board

A multilayered heavy copper PCB has enhanced mechanical strength due to the stack-up of layers, and the plated-through holes.

Instead of creating several duplicate and parallel layers, heavy copper may be used alongside copper vias (copper-plated). This reduces and even eliminated load sharing issues associated with multiple parallel layers. The vias are also an enhancement for heat dissipation and electrical conductivity, making heavy copper PCBs even better.

For the above benefits and abilities, heavy copper PCBs have a wide range of applications. Some of these applications include:

The automotive industry relies heavily on heavy copper PCBs. Automotive PCBs have to be lightweight and capable of being miniaturized while retaining high reliability. These are some of the benefits offered by heavy copper boards, making the ideal options here. These are properties that find useful application in vehicle speedometer, air conditioning system, music system, communication, and GPS location devices as well as the security systems.

Other applications may require a PCB with high thermal resistance. Such applications are found in the power transmission and control system, the engine system, among others where temperatures may be elevated. The temperatures within the engine area may fall down to -40C, and rise as high as 165C. It's only heavy copper PCB's (or better) that can safely withstand these temperature fluctuations.

Current electric cars are also huge markets for heavy copper PCBs. The high current that the charging system has to adequately handle cannot be adequately achieved with high-density copper conductors, such as those in heavy copper boards.

Again, the military and aerospace industries require PCB boards that can withstand tough and harsh conditions. These conditions entail drastic temperature ranges and varying conditions. The PCB will thus need to hold up when exposed to desert heat, extraordinary cold in places like near the poles, and other conditions such as humidity where weapon control and radar systems are expected to perform. The ability to bear all these conditions can at least be found in heavy copper flex PCB.

Military and aerospace industries have certain standards regarding the manufacture of their equipment. Such is the Standard FR4 PCBs. These standards call for state-of-the-art etching and plating technologies to ensure the edges are made straight while maintaining an optimal etching margin. We've mentioned plating, whereby several layers are stacked. The heavy copper PCB will thus achieve a shrunk layer, reduced impedance, and a compact form while reducing the overall cost of manufacturing.

The modern high-performance computing needs call for robust hardware, but yet one that is smaller in size than the predecessors. Computer motherboards are usually heavy copper for purposes of the high conductivity of both signals and current.

Another application in the computing system is in the UPS. UPSs are designed to allow outflow of high currents and at a considerably high voltage. For an ordinary PCB, this load would cause heating and would melt at some joints, short-circuiting the board. A heavy copper PCB must thus be used.

Making a satisfactory heavy copper PCB could be a daunting task, especially without the requisite funding for the advanced manufacturing process. Nevertheless, there are guidelines developed over time, to ensure optimal quality of heavy copper printed circuit boards. These guidelines include:

If the weight is generally expected to exceed 4oz, it's advised to use a double layer instead of having thicker copper.

Depending on the manufacturing process and the size of the board, it may not always be rectangular shaped. This is partly because the conductors (heavy copper) may cumulatively affect the board thickness.

The current carrying capacity is the main determinant of the PCB conductor's width and thickness. The maximum allowable conductor temperature will also determine the thickness and width.

The etching process produces trapezoidal cross-sections. This in turn leads to weaker solder joints and/or difficulty in placing components correctly because the SMT pad may be significantly thinner than it was designed. To thwart this, several solder masks are applied to the heavy copper traces to protect them.

5. Plating is preferred to etching

Traditionally, high-power circuits and control circuits could not be on the same board. To integrate the two circuits, the amount of copper thickness on the sidewalls can be enhanced by plating the board with heavy copper. This way, a high-current board is comprehensible on a simple board structure.

The typical conductor spacing remains within a tolerance of +/- 20%. The spacing may however be tighter.

The problem of load sharing across several parallel layers can be addressed by heavy or extreme copper conductors for the high current. Then, thicker copper vias along with the plated-through holes will aid at conductivity. Heat production resulting from losses in the board can thus be calculated more accurately. The end result is a cooler, and mechanically stronger board.

Despite the widespread demand for heavy copper PCBs, the high technological thresholds required to produce these boards have disqualified very many would-be manufacturers. This article has touched on the main pillars of heavy copper PCB design, so you can carefully select your PCB manufacturer. In some instances, you'll need to consider the cost against the quality you want.