What is PCB Milling?

PCB milling offers several solutions to the current demands. One of the ways that PCB milling technology assists in cutting down the overall production cost of a PCB. Building a circuit from a breadboard might be an expensive undertaking, let alone the intense labor and time. PCB milling allows the use of an existing PCB board to produce a stronger and more permanent circuit. In this article, we shall look into the whole process of PCB milling, its advantages, and the tips to getting the job done more efficiently. 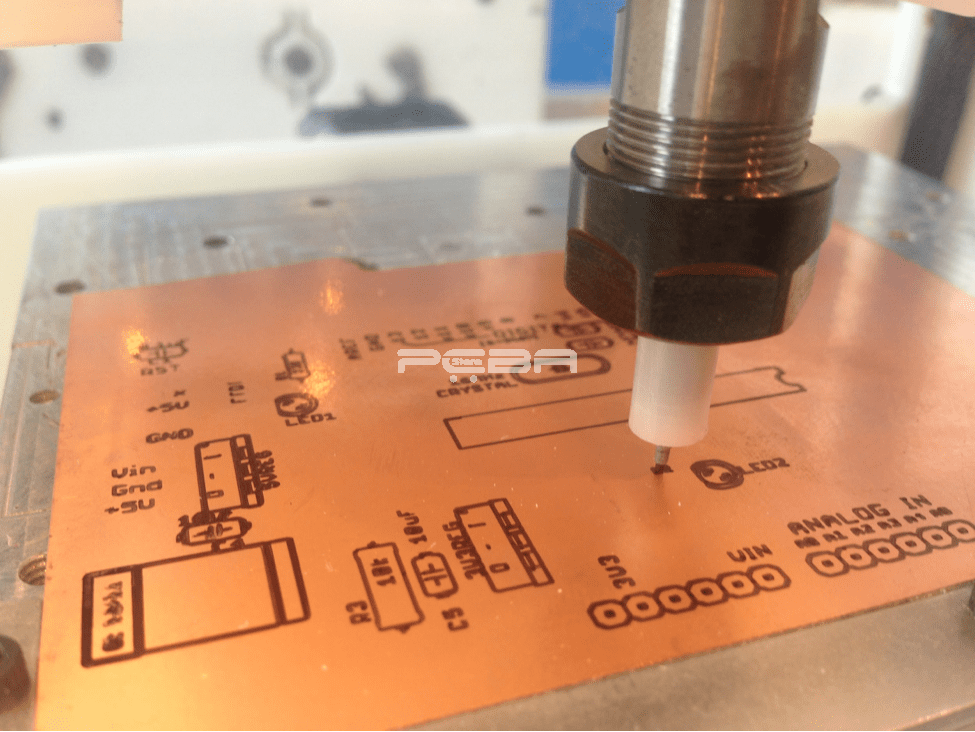 What is PCB Milling?

PCB Milling is also commonly referred to as isolation milling. The process involves scalping of a section or sections of copper traces from an existing PCB. The scalped areas provide space for the recreation of pads, signal traces, and other structures as displayed in a layout file. A layout file is just but a digital layout, or map, of the new circuit that we need to construct.

PCB milling aims at achieving the same results as the now common PCB etch process. The two processes are both subtractive, except that the PCB etch process relies on a chemical mixture to do the etching. On the other hand, PCB milling uses no chemicals, making it the ideal choice for anyone without a proper lab environment for etching. The etching chemicals are usually corrosive and produce harmful fumes upon reacting with the copper traces.

Even though PCB milling is safer per se, the quality of the resultant board depends on a few other factors. These include the milling accuracy, trueness of the system, and the control. If the milling bits are not well sharpened and/or tempered, or perhaps an incorrect rotational speed is set, the results will be undesirable.

If you etch the PCB instead, the quality of the results would depend on how good the protective mask is, and how effective the etching chemical is. The protective mask should accurately protect the copper traces on the sections it is applied to.

You can already tell some of the advantages of going the PBC milling way. From prototyping to making special PCBs, this process offers more than you already know. Discover more below.

The most straightforward advantage of using a PCB milling machine in place of etching is that you don't have to handle chemicals.

When building a prototype PCB, you may either need to outsource which may lag for weeks or simply make your own PCB at home. You can achieve the latter by either etching or milling. Should you opt for etching, you should have a proper disposal method, let alone the proper chemical handling. Also, the wet process is highly unsuitable for high-resolution boards, for obvious reasons. Note that you would still need to drill and cut the PCB out of the base material.

With a CNC PCB milling machine, you can create prototypes faster, and without worrying about the chemicals. It even gets better if the CNC machine can already do drilling since it allows both drilling and milling, and sometimes cutting, to be done on a single machine.

Some boards are very suited for PCB milling, but the same board might prove very difficult to handle via the wet process. Still, not many boards can withstand manual drilling in a lab, without them getting damaged. Even if the lab was to be set up to do that kind of work, it would cost several times more than a decent PCB milling machine would.

Both methods, milling, and etching are however preferred under varying circumstances. For instance, mass production employs etching, while the CNC machine has become the industry's favorite for drilling PCBs.

What is the PCB milling process?

The PCB milling process involves two systems, the hardware and software systems. The interaction of the user and the hardware system via the software interface allows for the creation of a prototype board. This, however, doesn't include the insertion of vias or plating the through-holes.

When fully set up, a PCB milling system will require just a power supply, and a vacuum cleaner to suck the copper and other chippings.

There are chiefly two software types, depending on the method of calculation. These are raster and vector software packages. You do not have to worry about these, as they are supplied by the machine manufacturer.

The hardware system would be described as a numerically controlled milling machine. This is after all the working principle of the setup. The system may have either a serial or a parallel port that connects to the main controller mounted on the machine. These ports allow for positioning and machine control signals to be relayed to the controller.

On receiving the commands (signals), the controller drives and monitors the positioning system that in turn adjusts the spindle and the milling head speeds.

Movement along the X/Y axis is facilitated and controlled by stepper motors, which are usually non-monitored. The Z-axis drive is also powered by a non-monitored lead screw. There is also a controlled DC motor to drive the spindle.

You'll find a precision leadscrew coupled to a stepper motor to run the Y/Y axes on most PCB milling machines. The leadscrew is in turn coupled with the milling head to synchronize the movements of the two assemblies.

Movement along the z-axis can be achieved in several ways. The motion can be initiated by a solenoid, a pneumatic cylinder, or a precision stepper motor.

A solenoid pushing against a spring is the most popular control method in the Z-axis drive. When powered the solenoid presses down the milling head. A spring-mounted against the milling head limits the latter's movement. The solenoid is equipped with a plunger from where the downward force and the speed of descent are adjusted.

A pneumatic cylinder attached to a gate valve and in turn controlled from the software can also bring about movement along the z-axis. The cylinder is small in size, thus limits the range. Just like a solenoid, a pneumatic operates two points- up and down positions. You may not control anything in between the two points.

There's often one major challenge associated with PCB milling; achieving a uniform milling depth. This can be addressed by levelling, as we'll see under the tips to producing a high-quality board.

You're probably not the first one to attempt and fail somewhere along the process of PCB milling. It could have been non-uniform milling depth or other shortcomings. Over time, manufacturers and individuals have perfected the art of CNC PCB milling and put forward tips to help others do the same faster. These tips include:

Since PCB milling involves subtracting a very thin layer of metal off the board, the user must ensure a uniform level. Leveling can be achieved in two ways:

Physical leveling is done by using a floating head CNC machine. Regardless of the bed's evenness, the head stays at a fixed depth. The milling tool bit is thus maintained at a fixed distance from the board. If the surface is kept clean, this leveling solution won't need any additional programming.

Physical leveling would require the user to buy a floating head assembly, which usually costs upwards of $200. Also, these floating heads can however be hindered by any swarf accumulated on the bed. To accommodate the floating head ring, the unit should be mounted over a relatively larger flat surface.

This is another possibility of achieving a uniformly milled PCB. Here, the bit distance from an uneven board is manipulated through the software. The user adjusts the G-code so that the CNC mills through the desired depths.

To level by this method, mount the PCB onto the machine and map it at regularly spaced points. This creates a map of the board's level. The machine then adjusts the G-code per the developed map.

The main programs used for this purpose are the PCB 2Gcode which is restricted to EAGLE PCB files, and Autoleveller, compatible with several PCB design platforms.

Pay attention to your end mill's track clearance and adjust it accordingly. Most common uses require a 0.5mm track clearance. Such a clearance can however hardly make tracks between pins on through-hole integrated circuits.

Sometimes you do not need a large area of copper and may want to mill it away. This is rather wasteful but is a way of avoiding issues with induced capacitance. Instead of ripping all that copper, you may leave the unused area unconnected. You can also fill out those areas with ground copper. The best method is usually to designate Voronoi zones to be able to use all the copper tracks.

If your CNC PCB milling machine can do all three operations i.e. cutting, drilling, and milling, ensure you have a gcode file for each operation.

In PCB cutting, the drills are used to drill holes through the board, while end mills are used to cut away the metal from the surface. Since these two types of bits are very similar, they can be easily mixed. In the worst-case scenario, you might mill a board with a drill, thus ruining it.

Once milled, the copper may corrode in the left exposed. To protect it, apply a solder mask.

Provided you observe all the machine operation guidelines, you will be safe with the PCB milling machine, except for the dust that comes off drilling fiberglass. This dust must be controlled with a vacuum cleaner to avoid inhaling it. This problem may also be solved by using the softer and non-dusty FR1 and FR2 copper clad boards.

Some other genius' solutions include pouring a thin layer of mineral over the metal before machining or having the machine work in an enclosed box.

PCB milling is an economical way of making better and stronger boards from existing ones. The process of milling, as well as the tips above, should get you started with PCB milling. You can search for more information on every step from the machine manual, or the internet.

Next article:Everything About Quick Turn PCB
Previous article:What is Silkscreen on PCB?